Xposed Framework is the key Mod for the many of the android device rooted users. It gives you best modules for customising your Android device completely. Even you don’t need to install Custom Roms for getting amazing tweaks and mods. There are many modules developing day by day for compensating the user needs. In today article we will guide you to install System-less Xposed Framework on Oreo Android devices. Yep, you heard right! Just follow the simple steps from below.

Recently we got the official Xposed-Framework for the android nougat devices after so many days from Rovo89 ( the master of xposed). But for Oreo 8.0 & 8.1+ devices it takes very much less time to come out. Now, the developers of Xposed modules are started updating their modules for the latest release.

What is System-less Xposed Framework?

Xposed Framework is the most powerful tool lets you bend your android operating system. This needs the xposed installer to manage the modules. The modules are the android apps which are specially designed for the xposed-framework. These will help you to tweak the android device as you want. You can get them from the popular android forums like Xda developers or download directly from the Xposed Installer android app via download section.

System-less Xposed framework is the modified version of the Original Xposed-framework from rovo89. This will help you to get the OTA updates and pass the Googles new security standard (safety net). Meanwhile, this will help you to work with the apps which don’t run on rooted devices. That is the main benefit for most of the users. It is ported as the magisk module by the topjhonwu (developer of magisk systemless root).

Step1:- Download the Magisk Module Xposed Framework according to the android oreo version

Step2:- Download the Xposed Installer Apk from below link.

Step3:- Install the Xposed Installer apk as like the normal apks which are downloaded from unknown sources. You would get a popup if you didn’t enable the unknown sources option on system settings. Just enable it and install.

Step4:- Open Xposed Installer app and grant the Super User permission. Now tap on 3dots at the right, right corner of the app. Select the Reboot into recovery option. It will boot your device into recovery mode. Or you can do it through manually.

Step5:- Now, tap on install button if you are using TWRP custom recovery. Now, Select the Magisk Module Zip file from the storage. 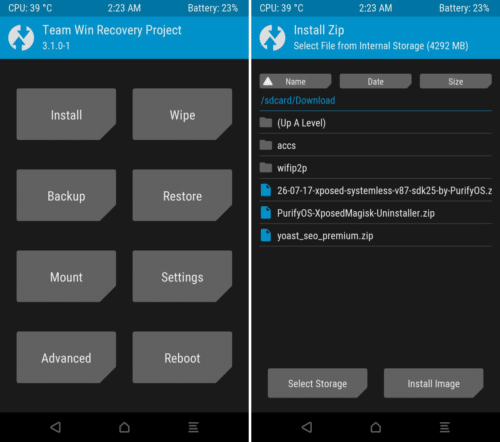 Step6:- Swipe the Install button. It will install the System-less Xposed Framework within a minute. Now, tap on reboot button. Your device will turn-on usually. 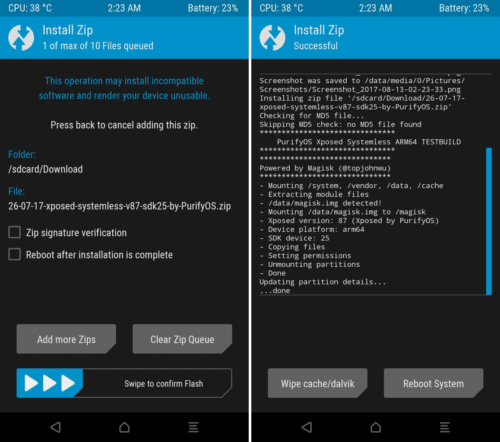 Step7:- open the xposed installer app and check the framework is installed correctly. And also open magisk manage app to check the module is active or not in the modules section. Even you can directly flash the zip file in the Magisk manager modules section by tapping the yellow colour + icon.

This the best way to install the Xposed-framework without changing the system partitions. The official one from rovo89 will disrupt the Safetynet pass so better to install this magisk module version. If you have any further quires regarding this article then comment below, we will respond to your comments as fast as possible.